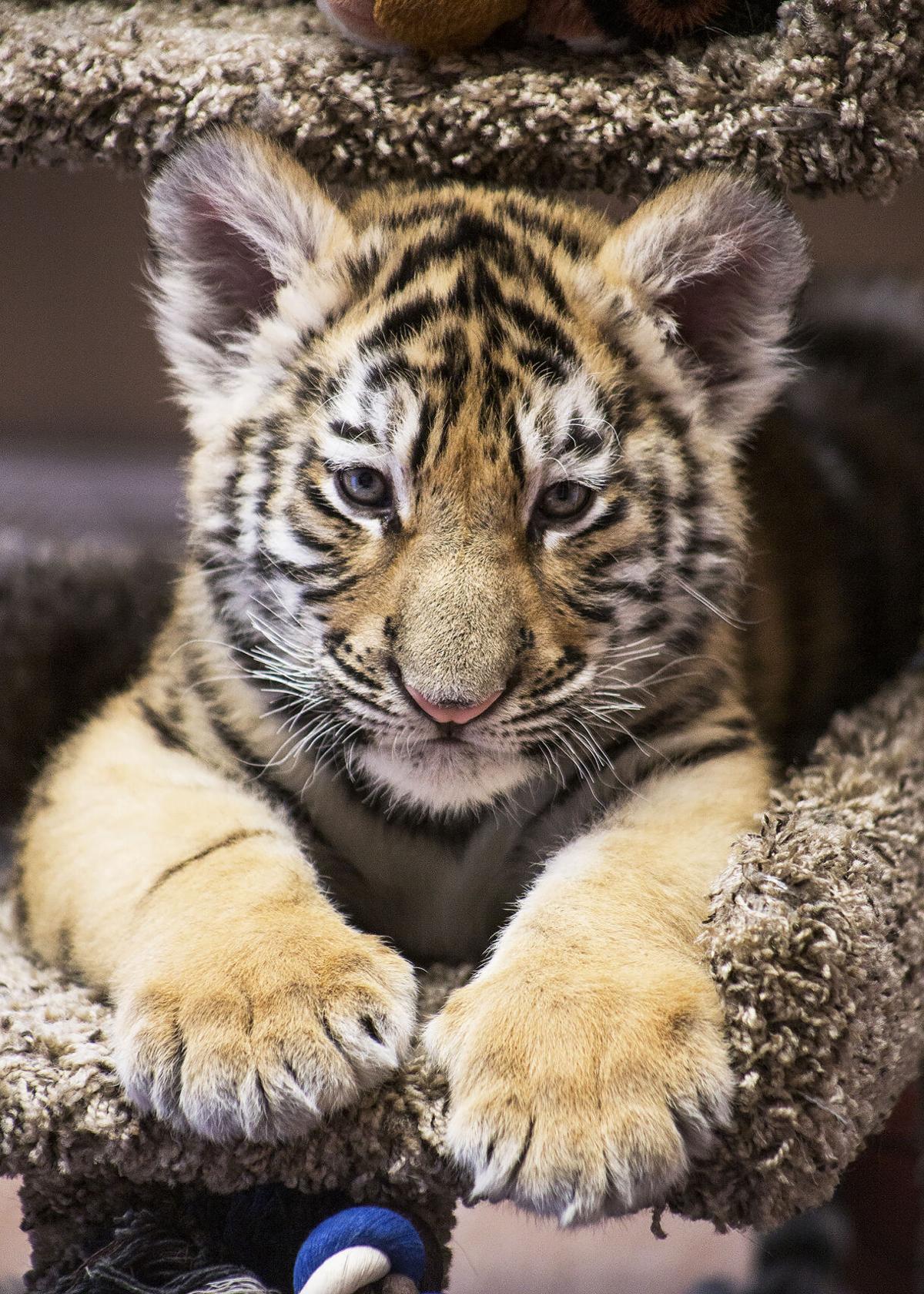 Dash, a Bengal Tiger rescue sits for a moment at the Wildcat Sanctuary in Sandstone. Dash was rescued as a three hour old cub November 2020. 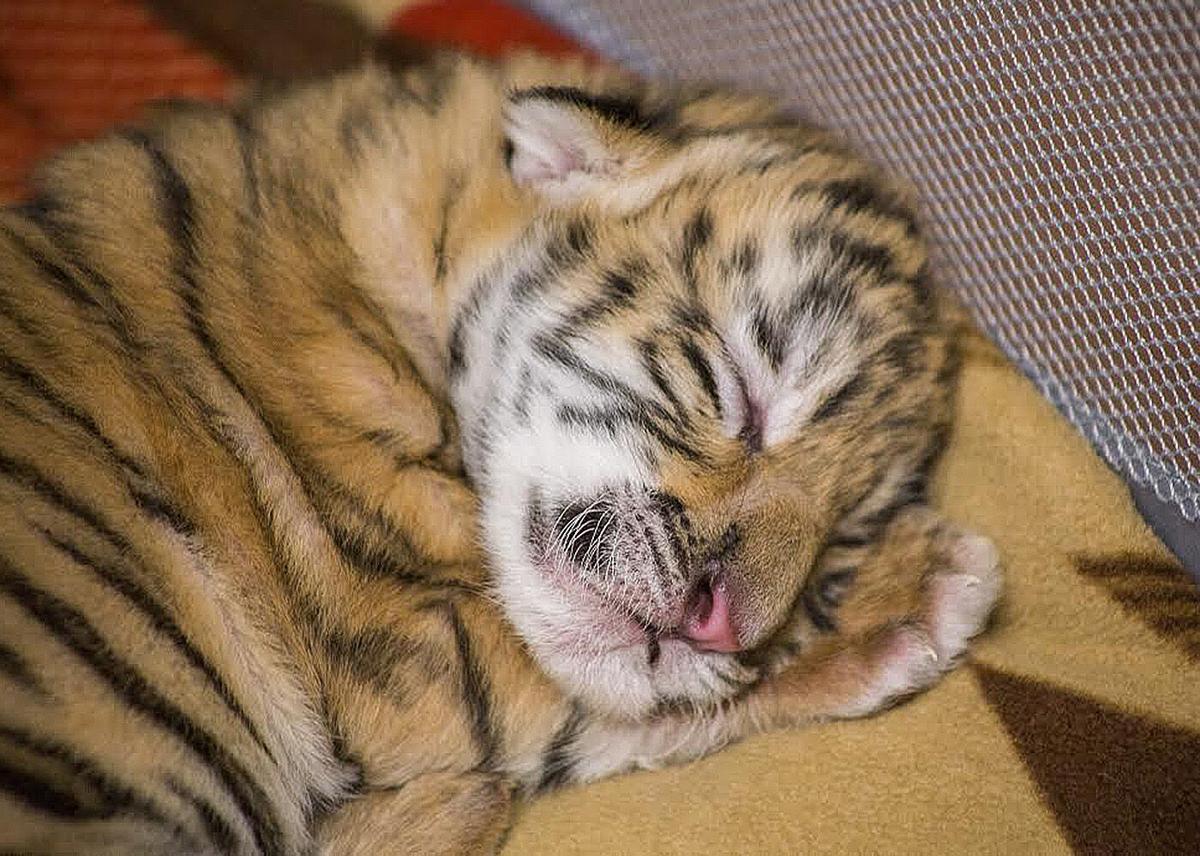 Dash takes a nap at the Wildcat Sanctuary in Sandstone. His umbilical cord was still attached and he was 3.4 pounds when sanctuary employees discovered him with his parents.

Dash, a Bengal Tiger rescue sits for a moment at the Wildcat Sanctuary in Sandstone. Dash was rescued as a three hour old cub November 2020.

Dash takes a nap at the Wildcat Sanctuary in Sandstone. His umbilical cord was still attached and he was 3.4 pounds when sanctuary employees discovered him with his parents.

The youngest addition to a Sandstone sanctuary is thriving, according to his caretaker.

Dash is a 10 week old Bengal Tiger who was rescued along with his parents in November of 2020.

“Dash is very independent and determined,” said Tammy Thies, founder of the Wildcat Sanctuary in Sandstone, Minn. “His favorite pastime is trying to drag his toys around. He’s a predator in training.”

The sanctuary was contacted to remove four big cats from out of state after the owner passed away, Thies explained.

They were surprised to discover a fifth cat, a newborn cub.

“He was estimated to be three hours old,” Thies said. “He still had his umbilical cord attached.

The big cats were kept in small, muddy cages and used for breeding. Thies said the owners took the cubs away from their mom when they were eight hours old, then sold them to roadside zoos or other cub petting operations when they were six weeks old.

When Thies arrived, they discovered the long dirt driveway was barely drivable. It was littered with old appliances on each side and riddled with potholes. The cat’s owner did not have running water or electricity at the  rural residence.

Thies said the male cat was as surprised as everyone else at the discovery of the newborn cub.

The caretakers said the adult male had killed cubs in the past. Sanctuary members quickly sedated the adults and brought the 3.4 pound cub to safety before the male could harm him.

Thies said the successful rescue of the rambunctious cub is bittersweet. While Dash will never roam free, he will live in a large habitat where he will be taken care of and have plenty of space to play. He will receive regular veterinarian care and be safe from people who may otherwise attempt to exploit the little black and orange striped cub for financial gain.

She said many cubs used at petting operations are intentionally malnourished to keep them small and docile for photo opportunities with the public.

“He wont end up in a roadside zoo,” said Thies. “He will be well taken care of. We don’t buy, breed or sell the cats. We are 100% a rescue organization.”

Dash’s parents, Marcus and Winona are together again at the sanctuary and doing well.

“Winona is doing really well,” said Thies. “She had to defend herself and her cub from the male for many years and now she doesn’t need to.”

Dash was fed every two to four hours day and night for several weeks. He has since graduated to a combination of milk and solid food. Thies said Dash is doing great and reaching all of the milestones.  He is kept in isolation due to the threat of COVID-19 and other contagious diseases.

Thies said they suspected several of the big cats contracted COVID-19 in January. According to the sanctuary website, Sabrina is a 21-year-old tigress who was confirmed positive by the U.S. Department of Agriculture’s National Veterinary Services Laboratories. Other tigers, lions and cougars exhibited mild symptoms and have since recovered.

Thies said they suspect the animals caught COVID-19 from an asymptomatic employee.

The sanctuary is a non-profit organization and depends entirely on donations, said Thies. They do not receive any government funding. A sponsorship program is set up in Dash’s name. The money is used for his care, including vet checks, neutering and microchipping.

“We take what we do very seriously,” said Thies. She said Dash will grow up to 300 pounds and is a 20 year commitment.

Dash has his own Facebook page, Daily with Dash. Photos and videos allow viewers to watch as the little cub grows into a big cat.

The sanctuary is closed to the public.

For more information visit the sanctuary website at https://www.wildcatsanctuary.org