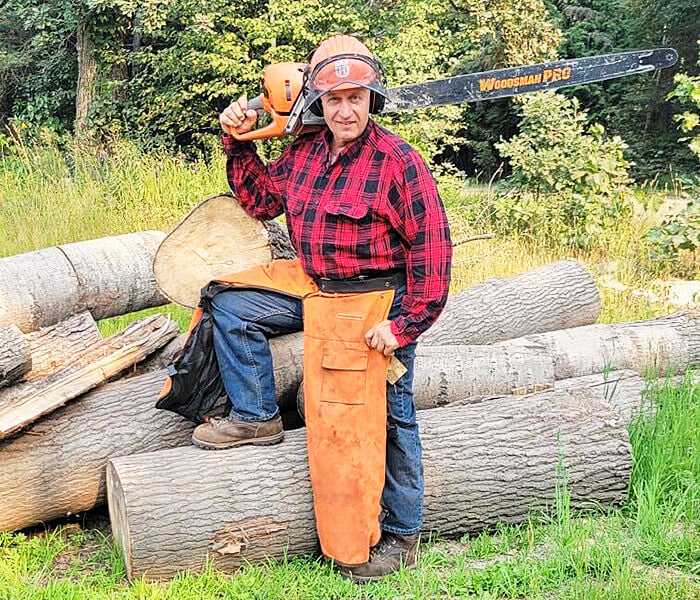 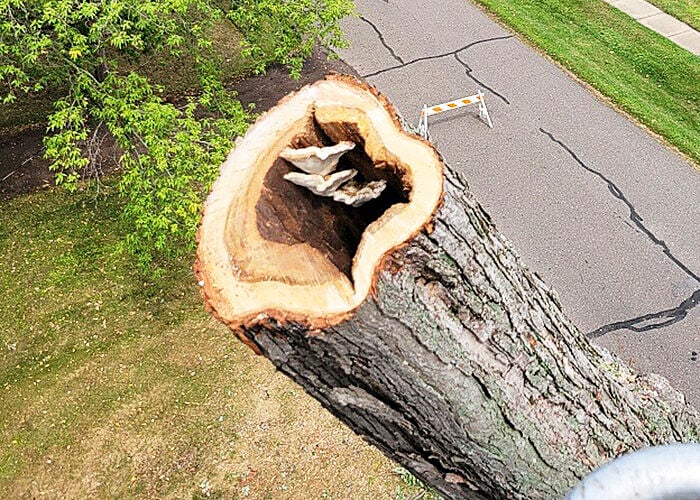 Mushrooms inside of a dying tree.

Mushrooms inside of a dying tree.

Bernie Tocholke goes out on a limb for his job. He does it less often these days than when he began working as an arborist many years ago. He explains that he cuts down problem trees in yards for residents and used to climb up the trees to cut the branches down. Now he uses machinery to reach the heights.

The now 61-year-old began logging in 1987. He said that training gives him an edge over newer competition. He explained that he learned to notch a tree in the forest to cause it to fall between other trees and not get hung up, which would cause more work. Over the years the number of logging jobs dropped and the cost of the machinery rose substantially. After roughly 17 years in the logging business, Tocholke decided to switch jobs and became an arborist.

“It became fun,” Tocholke said enthusiastically. He works from sun-up to sun-down, six to seven days a week and is currently booked solid for several months.

Tocholke had a few close calls over the years, from a tree falling less than a foot away from him, to falling out of a tree. He also had a dropped branch unexpectedly bounce and roll until it broke a basement window in the customer’s home. The Bruno resident said he learns from the close calls.

“After 34 years I’ve figured out which end of the saw to hold,” Tocholke said with a big grin.

He said he has learned a lot about trees over the years also, such as cottonwood trees do not flex. Most of the calls are from customers who have diseased or dying trees. He rattled off a list of issues such as oak wilt, orange blight, core rot and more.

“If there is fungus on the side of the tree, that means it’s punky on the inside,” Tocholke said. “If you see a woodpecker on the tree, it has found insects. If you see a row of little holes and another row under it, that’s from a sapsucker. They can kill trees.”

He also taught his son, Randell, how to log and drop trees. He said his son did not appreciate his skill set until years later when his first job choice didn’t work out. He took a job as an arborist in the Twin Cities. His boss booked a job that he thought would take all day. Randell suggested they notch the trees to fall between the houses. After some thought his boss reluctantly agreed to let him try one. He was shocked when it fell where Randell said it would. He let him take down the other trees and had the job wrapped up in a few hours instead of the full day he originally planned.

“There are so many different situations,” Tocholke said. “Don’t start the saw unless you know where the tree is going to land.” He said he can tell if a job is going to be dangerous before he even starts the chainsaw and will decide what to do according to the individual situation.

His favorite job is figuring out where to place the strategic cuts to get the tree to land exactly where he wants it. He said an impressed observer called him a tree whisperer.

He removed a tree for Rosi Holmes recently.

“He can fell a tree on a paper plate as a target,” Holmes said in an email. “Most of his work is felling trees in tight quarters.” She said she also appreciates his crazy sense of humor.

Tocholke recommends getting multiple estimates when searching for someone to take a tree down. He said they should also make sure the arborist is insured, ask about experience and to see photos of past jobs.

In his spare time Tocholke writes books. He is waiting for his latest, a mystery titled, “Evading the capture” to be printed and become available in the coming weeks.