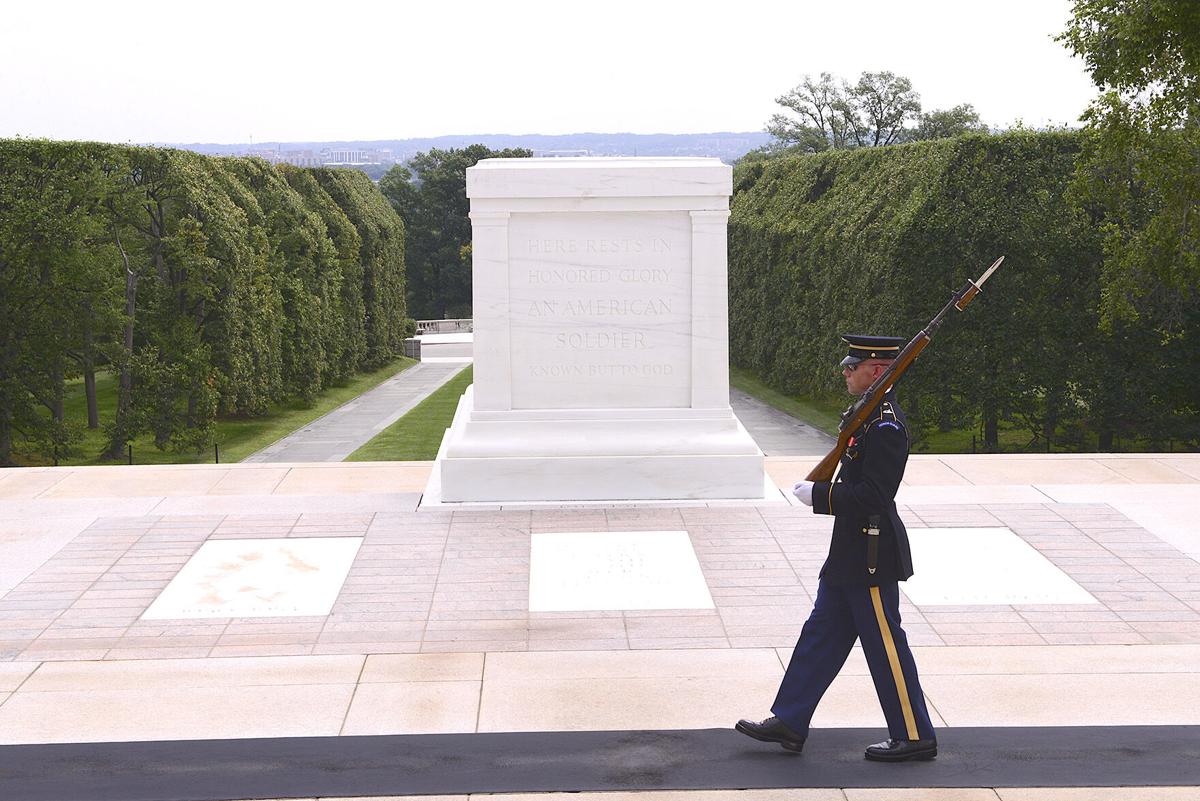 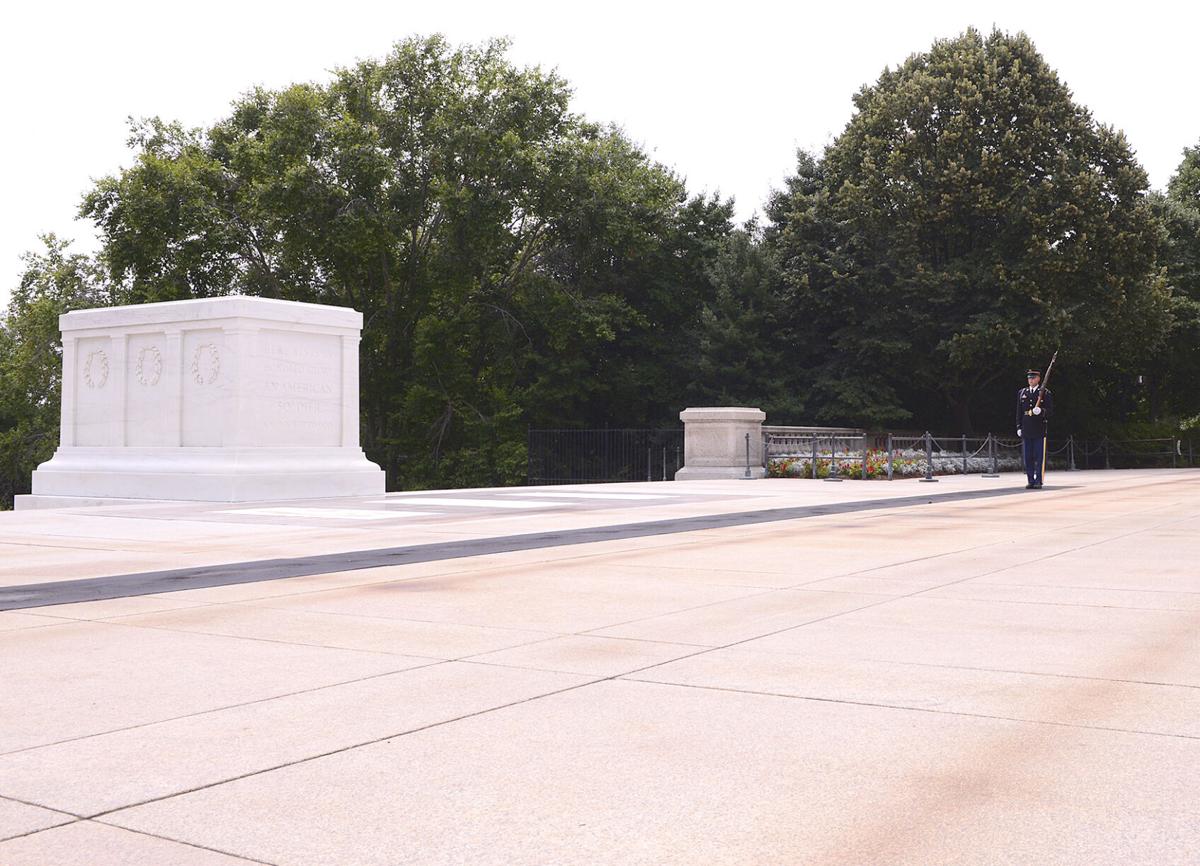 We are met today to pay the impersonal tribute. The name of him whose body lies before us took flight with his imperishable soul. We know not whence he came, but only that his death marks him with the everlasting glory of an American dying for his country.

These words began the speech by the 29th President of the United States Warren G. Harding as he dedicated the tomb of the unknown soldier on November 11, 1921.

The tomb of the unknown soldier, located in Arlington National Cemetery, provides  a final resting place for one of America’s unidentified WWI service members. In December of 1920 New York Congressman Hamilton Fish Jr., who was also a WWI veteran, proposed legislation that provided for the internment of one unknown American soldier at a special tomb in Arlington. According to the Arlington National Cemetery website, the purpose of this legislation was to “bring home the body of an unknown American warrior who in himself represents no section, creed or race in the late war and who typifies moreover the soul of America and the supreme sacrifice of her heroic dead.”

According to the Arlington National Cemetery website, in October of 1921, four bodies of unidentified U.S. military personnel were exhumed from different American military cemeteries in France. On October 23, 1921 the four caskets arrived at Chalons-sur-Marne, France, where the city hall had been prepared for the selection ceremony.

On October 24, 1921, Robert P. Harbold of the Quartermaster Corps chose Sgt. Edward F. Younger of Headquarters Company, 2nd Battalion, 50th Infantry, American Forces in Germany, to select the Unknown Soldier. Sgt. Younger made his selection by placing a spray of white roses on one of the caskets.

After the selection had been made the Unknown Soldier was transported to the United States on the USS Olympia, arriving in the Washington Navy Yard on November 9, 1921. The Unknown Soldier lay in state in the U.S. Capital Rotunda where about 90,000 visitors paid their respects.

On November 11, 1921, the Unknown Soldier was placed on a horse-drawn caisson and carried in a procession through Washington, D.C. and across the Potomac River. A state funeral ceremony was held at Arlington National Cemetery and the remains were interred in the Tomb of the Unknown Soldier. Nationwide, Americans observed two minutes of silence at the beginning of the ceremony. President Warren G. Harding officiated at the ceremony and placed the Medal of Honor, the nation’s highest military decoration, on the casket. Numerous foreign dignitaries presented their nations’ highest awards, as well.

Eventually, the remains of an unknown soldier from WWII, Korea and Vietnam would be interred in the crypts just to the west of the Tomb of the Unknown.

In March of 1926, soldiers from Fort Meyer were assigned to guard the tomb. At that time the guards were only present during daylight hours, this discouraged visitors from climbing on or stepping on the Tomb. In 1937 the guards began standing watch 24 hours a day, seven days a week.

In April of 1948, the 3rd U.S. Infantry Regiment known as “The Old Guard,” was designated as the Army’s official ceremonial unit and began guarding the Tomb of the Unknown Soldier.

According to the Arlington National Cemetery website: Soldiers who volunteer to become Tomb Guards must undergo a strict selection process and intensive training. Each element of the Tomb Guard’s routine has meaning. The Guard marches 21 steps down the black mat behind the Tomb, turns and faces east for 21 seconds, turns and faces north for 21 seconds, and then takes 21 steps down the mat. Next, the Guard executes a sharp “shoulder-arms” movement to place his/her weapon on the shoulder closest to the visitors, signifying that he or she stands between the Tomb and any possible threat. The number 21 symbolizes the highest symbolic military honor that can be bestowed: the 21-gun salute. The changing of the guard happens every hour during winter, and every half hour during the summer and daylight hours.

In respectful silence these sentinels have stood guard at the Tomb of the Unknown soldier for the last 95 years. This October, history was made again at the Tomb, the first all female changing of the guard occurred. Women were not allowed to volunteer for the Tomb Guard Platoon until 1994, according to the Society of the Honor Guard, an organization that works to preserve the history of the site. Since 1994 there have been six women that have earned the honor of guarding the Tomb of the Unknown Soldier.

FACTS AND RUMORS ABOUT TOMB OF THE UNKNOWN SOLDiER SENTINELS

• Army Sgt. Heather Johnson became the first woman to earn a Tomb Guard badge in 1996. Five other women have earned a badge since.

• A sentinel has stood in front of the Tomb of the Unknown Soldier every minute since 1937 with no exception.

• The small green shack near the monument, called “the box” by sentinels, is used by guards to “retreat to” while flowers and “Taps” are being presented at the Tomb. The box also has a phone line to the Tomb Guard’s quarters.

• Soldiers must be at least 5-feet-8- inches tall to be a sentinel.

• It has been said that sentinels need to commit two years to guard the Tomb — they don’t. In fact, an average tour at the Tomb is 18 months.

• Another false rumor is that Tomb guards are never allowed to curse in public for the rest of their lives. They, indeed, are allowed.