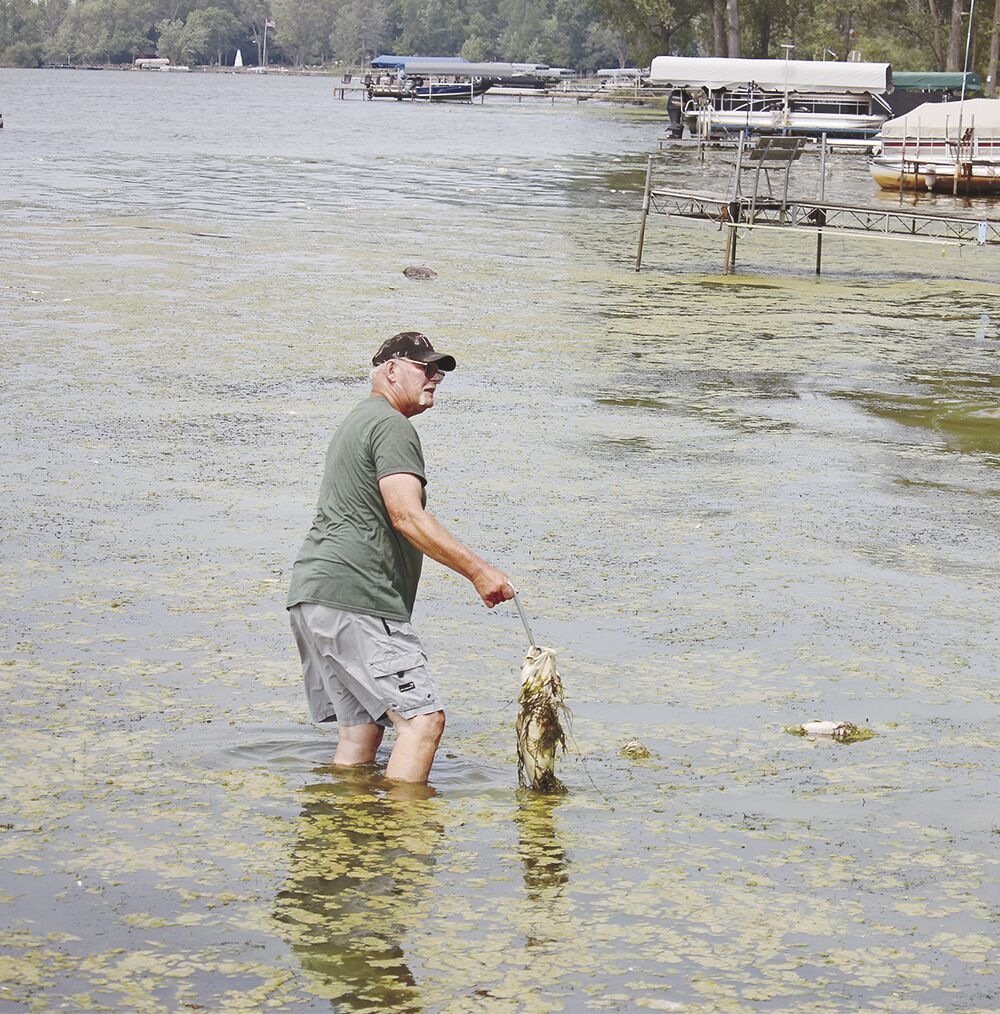 Residents had to haul in massive walleyes and northerns that would have been prize catches under different circumstances. 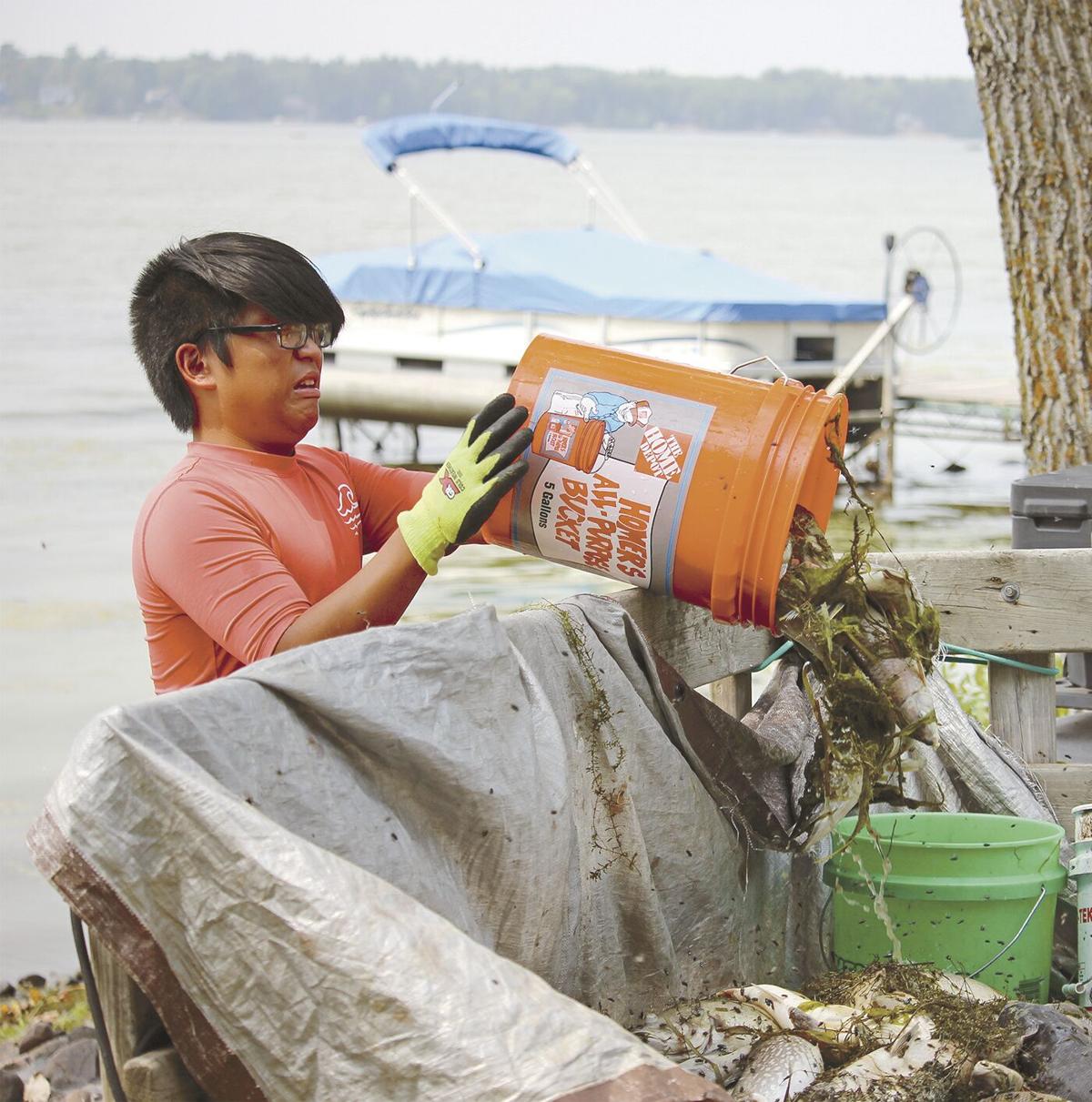 Fish? Ish! After the Wednesday night fish kill, a crew of family and friends of the affected property owners spent a number of long, smelly hours during the course of the week hauling hundreds – if not thousands – of deceased fish off the shores of Pokegama Lake to be disposed of at a nearby farm.

Residents had to haul in massive walleyes and northerns that would have been prize catches under different circumstances.

Fish? Ish! After the Wednesday night fish kill, a crew of family and friends of the affected property owners spent a number of long, smelly hours during the course of the week hauling hundreds – if not thousands – of deceased fish off the shores of Pokegama Lake to be disposed of at a nearby farm.

A major fish kill on the northeast section of Pokegama Lake has resulted in the death of many hundreds of fish – including numerous game fish.

The fish kill took place sometime during the night of  Wednesday, July 21. Property owners along Sunset Trail woke up on Thursday to the sight and smell of fish floating belly-up.

Home and cabin owners along that stretch of shoreline were joined by volunteers and helpful family members as they gathered the corpses from the shore and water, dumped them into wagons, and hauled them to the property of a nearby farmer who agreed to deal with the mess in order to repurpose the fish into fertilizer.

Anglers couldn’t help but note that a number of the walleye and northerns – some more than 20 inches long – that died in the kill would have been a lot of fun to catch, and might have even looked good on the wall.

And many asked the simple question: What caused this fish kill?

Hinckley’s DNR Area Fisheries Supervisor Leslie George said that their pathology lab was unable to study fresh enough samples of dead or dying fish to be able to come up with a firm cause of death.

“So we’re going to be left with some informed speculation,” George said.

George pointed out that there have been a series of fish kills around the state due to the stressful environmental conditions, including long streaks of hot weather and the smoke haze caused by the Canadian fires.

She also said that the weakened fish would also be more prone to disease.

“Fish can succumb to what we would call ‘opportunistic infections’ when things get tough environmentally,” she said.

George noted that all the dead fish were found along a stretch of the northeast corner of the lake, with the rest of the lake apparently unaffected.

“It did appear to be a relatively localized event,” she said. “It was pretty remarkable what a difference it was in the one corner versus the entire rest of the lake. It was a regular Thursday and Friday for them, compared to those who were in the downwind corner.”

George said that photos of the area reveal that there was an algae bloom in the area at that time. With the smoke haze blocking the sunlight, lake plants would have been unable to produce much oxygen during daylight hours. And during the nighttime hours, those same plants that produce oxygen during the day consume it instead.

“We may have also had a localized low-dissolved oxygen event, and those fishes just didn’t get out of there,” she said. “Environmental conditions – that’s where we’re currently pointing the finger.”

She said she hopes that this is a one-time event, and not a sign of things to come.

“We have a lot of other stressful conditions the fish have been enduring this summer,” George said.

The current incident brought back memories of the massive springtime fish kill of May 2018 in the same area of Pokegama Lake. That kill involved mostly sheephead, with some carp and suckers present – and thousands of fish were killed.

The DNR stated then that the 2018 fish kill was likely stress-related due to the extended period of low dissolved oxygen during that very long winter. This created a phenomenon known as winterkill. When snow and ice limit the amount of sunlight reaching aquatic plants, the plants produce less oxygen. Winterkill happens when fish die from depleted oxygen levels.