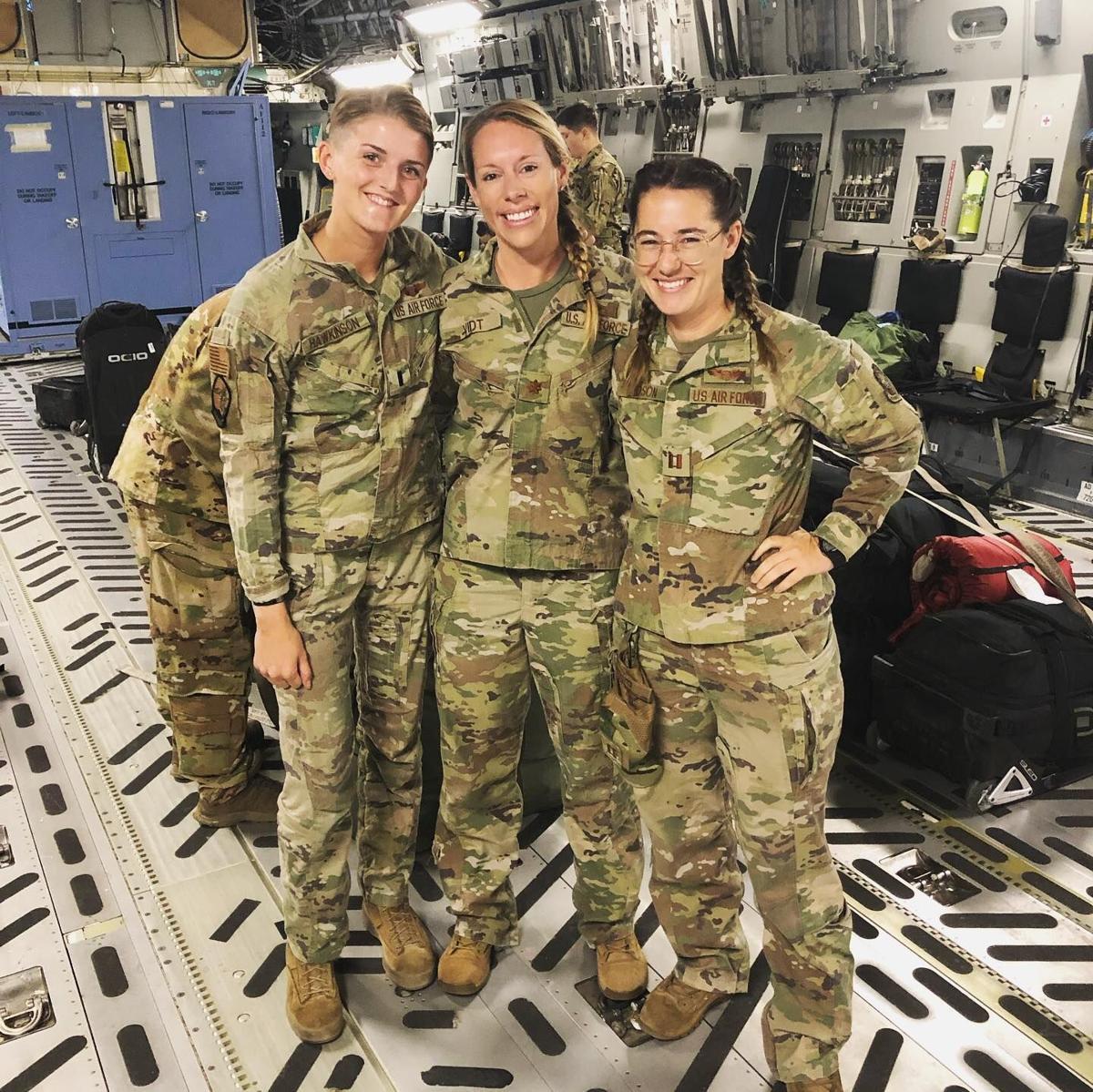 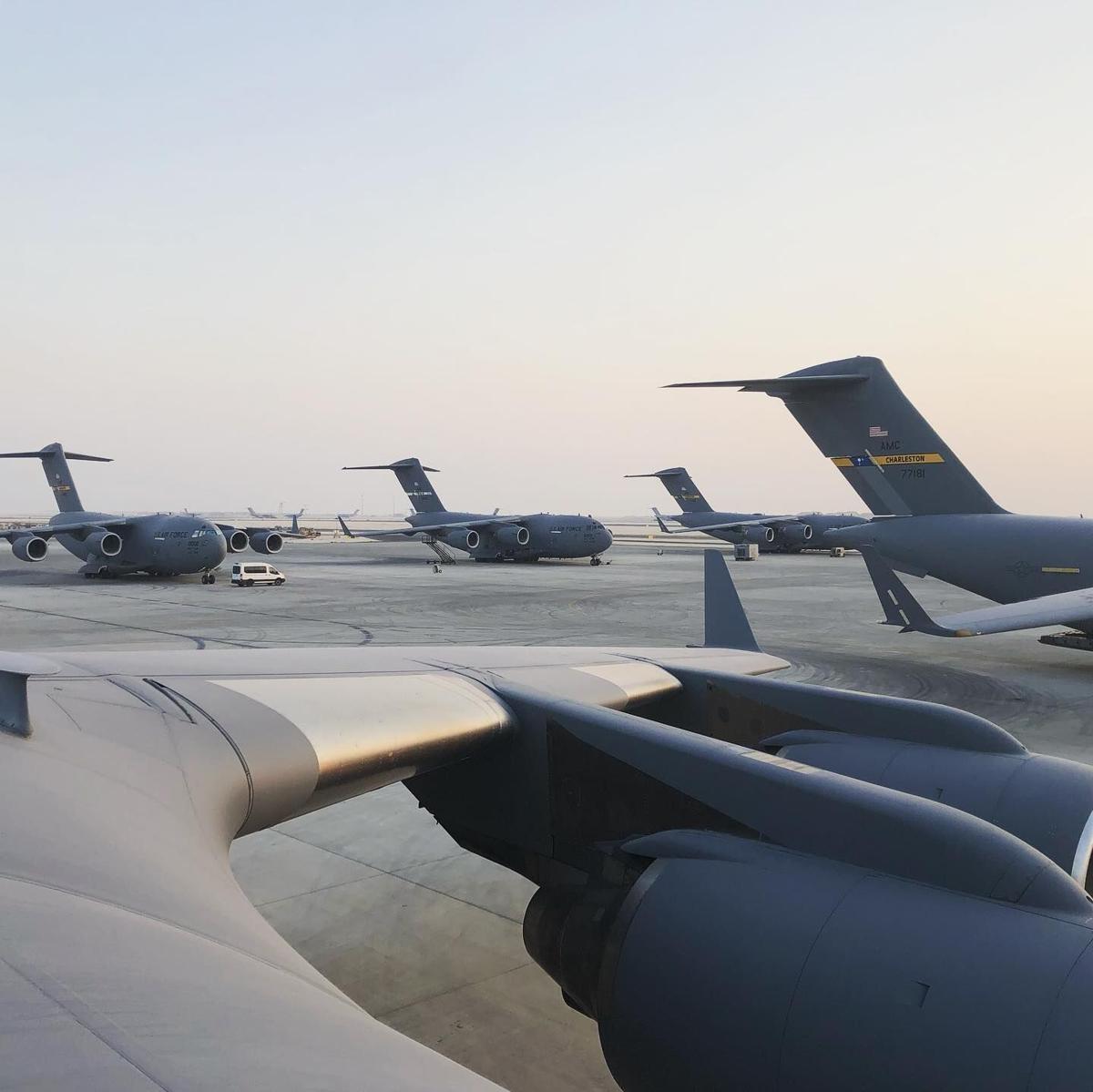 U.S. cargo planes wait at the Al Udeid Air Base in Qatar to evacuate refugees from Afghanistan.

U.S. cargo planes wait at the Al Udeid Air Base in Qatar to evacuate refugees from Afghanistan.

Twenty-six year old Kaitlyn (LaFrance) Hawkinson sort of fell in to her career as a pilot in the United States Air Force.

Even her mother, who thought Kaitlyn (now Captain Hawkinson) might pursue a career in theater, didn’t expect her to play a role on the world stage flying C-17 aircraft to evacuate refugees from Afghanistan.

Even though both her parents, Susie Folwick and Scott Sperling, worked on cargo planes in the Air Force, they didn’t expect her to follow suit.

Throughout high school, Hawkinson was active in school sports and the drama department. Her mother expected her to find a job in the arts.

“She totally blew me away with her career choice,” Folwick said.

After graduating from Mora High School in 2013, Hawkinson enrolled at the University of Minnesota and earned a Bachelor’s Degree in German, Scandinavian and Dutch studies. While in college she joined the Reserve Officers’ Training  Corps (ROTC).

“When I first joined ROTC I didn’t know I wanted to be a pilot. I was open to whatever,” Hawkinson said.

In 2017, Hawkinson was commissioned in the Air Force. During her field training she discovered friends and mentors among the senior cadets who influenced and encouraged her on her path to pilot.

In July 2017, she married Ford Hawkinson, an officer in the U.S. Army.

Hawkinson entered active duty in Feb. 2018 and she began her pilot training. As her training progressed, she was selected to fly the Boeing C-17 Globemaster, the Air Force’s primary aircraft for transporting troops and equipment.

Hawkinson said for her, it was the perfect fit. She’s grown to love the C-17 community and loves her missions.

“For the pilot community, the friends that you make end up incredibly close.”

Today, she and her husband are stationed at the Joint Base Lewis–McChord in Washington, a combination of the Army’s Fort Lewis and the Air Force’s McChord Air Force Base.

This summer, the United States accelerated its withdrawal from Afghanistan to end the 20-year war. Quickly, the Taliban began to re-take control of the country.

On Aug. 15, the Taliban seized control of Kabul. World embassies evacuated and retreated to the Hamid Karzai International Airport in Kabul. The airport became the center of the evacuation effort of  diplomats, allies and refugees.

“We weren’t expecting Afghanistan to implode like it did, at least not for a couple months,” said Hawkinson, who was on leave at the time. She watched the news and saw the Taliban taking more control over the country.

“It was about to be all hands on deck.”

As she expected, Hawkinson was called to return from leave and was quickly deployed to the other side of the world.

Hawkinson joined a team of two other pilots — both of which also happened to be women: Major Courtney Vidt and Captain Meg Edson. It struck Hawkinson as incredibly rare considering only 7% of the pilots in the Air Force are female.

The days that followed were long with little rest as her crew made repeated flights carrying evacuees from Kabul, west to Qatar then to Germany.

“We were absolutely exhausted,” said Hawkinson. “But we knew what we were doing and the importance of it. So, we were just hanging on as much as we could while maintaining aircraft safety.”

On one of these trips, their plane was filled with approximately 450 people. While they waited on the ground in Qatar, Hawkinson went to talk to some of the people on board. She met a surgeon. He had been wounded and had stitches in his head and bullet wounds elsewhere. He told her his story of how he had given medical care to U.S. troops and was attacked by the Taliban for it.

Thank you, he told her.

“It gave a lot of perspective on the people we were taking out,” said Hawkinson. “These people had done a lot for the U.S., so it was cool to be paying them back by getting them out of the country and into the U.S.”

On another trip, Hawkinson’s crew was about to fly out of the Kabul airport when they were asked if they had room for approximately 20 orphans to board.

“Hearts sank, but we were also honored to pick up these kids and get them out of there. So of course we said yes.”

Once out of the country, Hawkinson was able to see the kids play at the terminal and watched how they took care of each other.

Reflecting on her experience, she said, “That was the most stressful week and a half of my life.”

Hawkinson remembered the people she helped, marveled at the unexpected beauty of Afghanistan’s mountains and lakes, and mourned those who had lost their lives in the conflict.

At home, Captain Hawkinson’s mother watched the news of chaos and attacks in Kabul.

“As a mother, you always worry about your kids ... But I knew she was in good hands,” said Folwick.

Folwick’s other daughter is also in the Air Force. “So I’ve got both of them to worry about.”

Worry, she said, goes with the territory of a military life.

Of Hawkinson she said, “I am so proud of her ... I know it takes a lot mentally and physically. I’m so very proud of everything she has accomplished.”