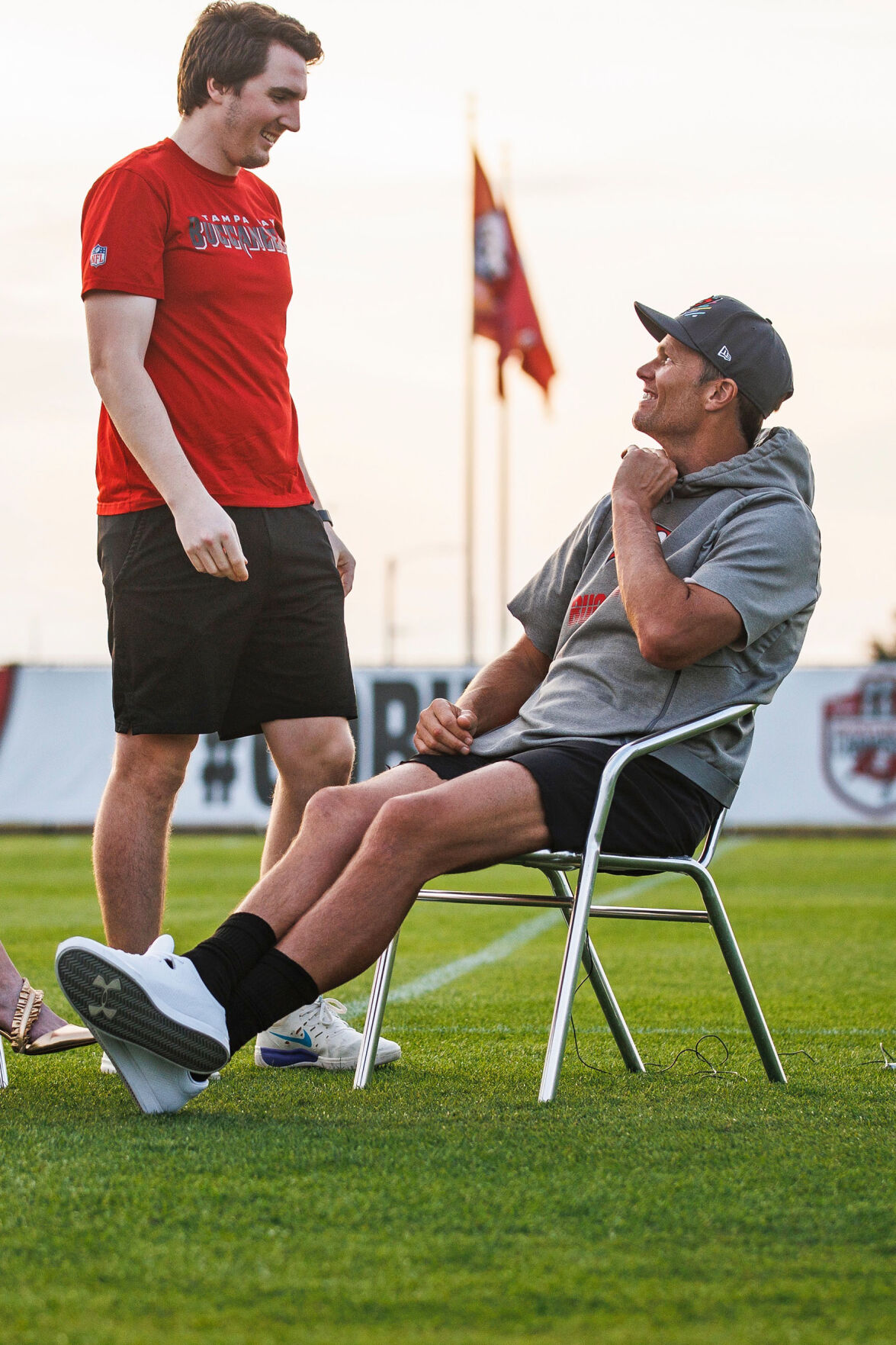 Connor Clark, a Pine City native, interacts with Tom Brady (quarterback of the Tampa Bay Buccaneers and most winningest Super Bowl quarterback ever), after a shoot on Dec. 9. Clark said that they were just wrapping up the shoot that day. He approached Brady to get the mic from him, joking about how they could do a few more takes that day – but it was already around 5:30 p.m. and they were both ready to go home. 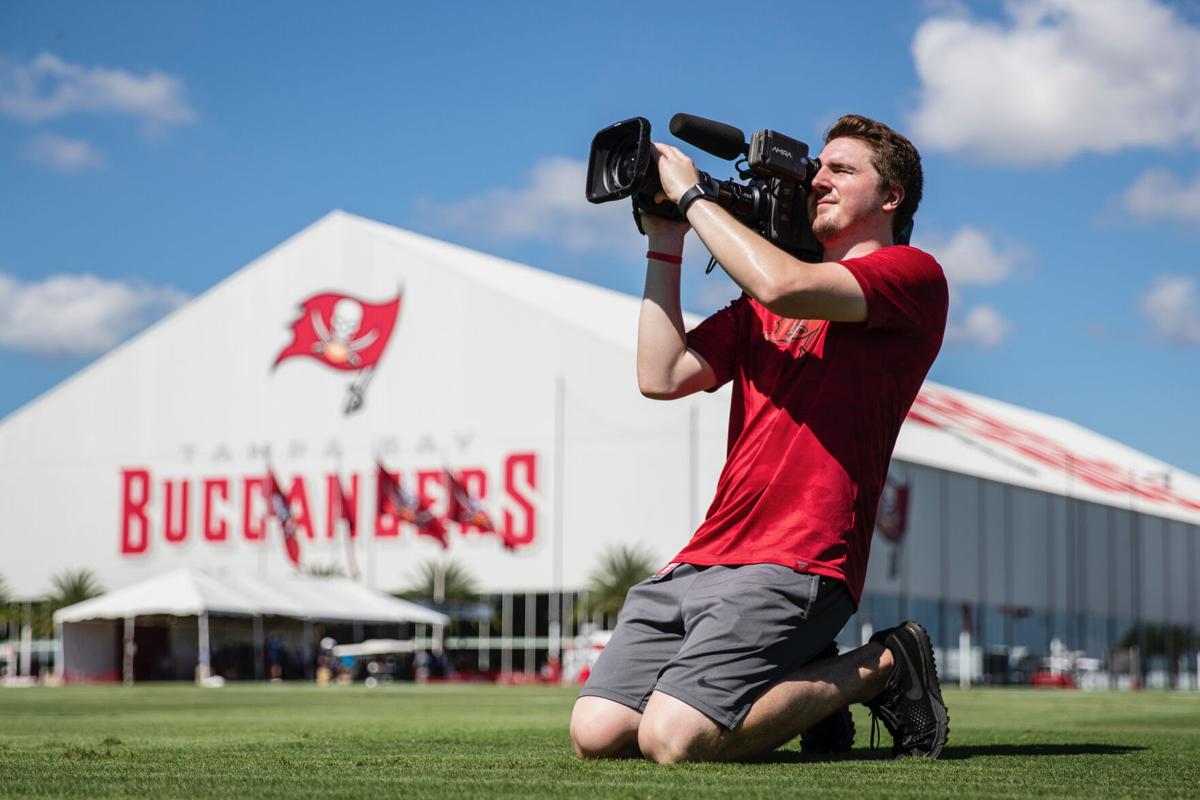 Connor Clark during a Buccaneers training camp at their practice field in August. 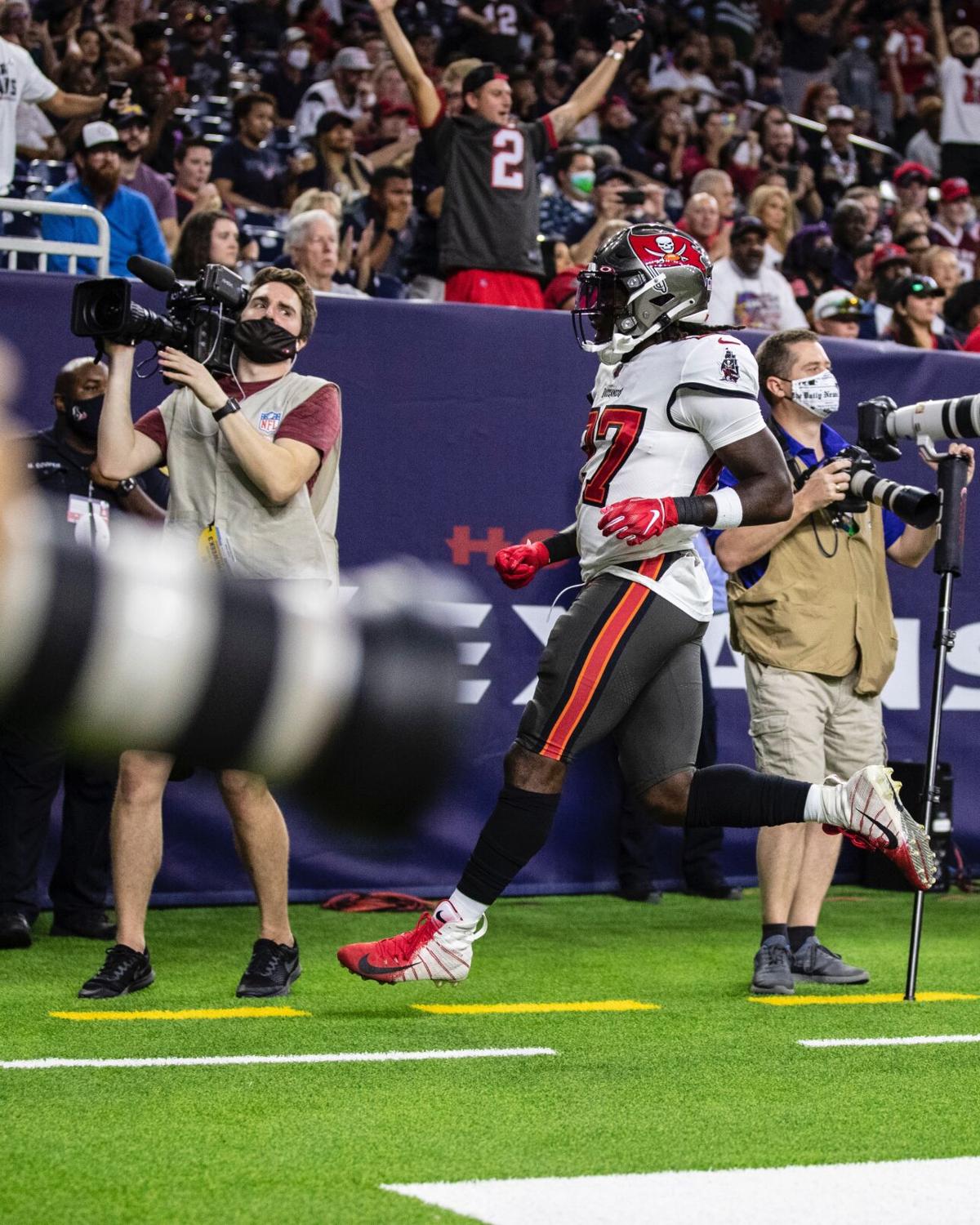 Clark during the Texans preseason game where Ronald Jones (#27) ran for a touchdown and almost ran Clark over at the last second.

Connor Clark, a Pine City native, interacts with Tom Brady (quarterback of the Tampa Bay Buccaneers and most winningest Super Bowl quarterback ever), after a shoot on Dec. 9. Clark said that they were just wrapping up the shoot that day. He approached Brady to get the mic from him, joking about how they could do a few more takes that day – but it was already around 5:30 p.m. and they were both ready to go home.

Connor Clark during a Buccaneers training camp at their practice field in August.

Clark during the Texans preseason game where Ronald Jones (#27) ran for a touchdown and almost ran Clark over at the last second.

A Pine City grad is living out the dreams of many former Dragon athletes as he now spends time with top names in professional football, such as Tom Brady, Rob Gronkowski, Devin White, and Mike Evans, for his day job.

Connor Clark, a 2015 Pine City High School alum, is currently working as a producer for the Tampa Bay Buccaneers. The position of a producer requires him to wear a lot of different hats: focusing on camera operation, use of lighting, sound and audio, and directing the talent on the set.

“In the NFL, you have to do all of those, all at once,” noted Clark. “It’s a very fast paced, high stress, but a super fun and rewarding job.”

A typical week for Clark includes a great deal of work, especially after a win. “When we win, we try to pump out as much content as possible for our fans to consume,” said Clark. There are  sporadic videos filmed during the week, but the main shows he works on are the Bruce Arians Show, Mic’d Up, Ultimate Teammate, and Goal Getters. “For bigger shows like Tommy and Gronky, or Horsin’ Around With Devin White, our entire production staff is usually involved in those.”

The NFL has very strict limitations on who can be around and work with players and coaching staff, but Clark is fortunate enough to be among those people. “But that also means I am the one who will have to set up and film special requests, even if it’s not technically my project,” said Clark. “These requests can come both internally from the Bucs but also externally with networks like CBS, NBC and Fox reaching out with specific requests for the players.”

But for Clark, gamedays are the highlight.

For home games, he is in charge of setting up and filming the “Mic’d Up” series, a series where they put a microphone on a player and follow them throughout the whole game.

“I usually get to the stadium five to six hours before kickoff to get in the locker room and put the mic on the pads for whoever we are micing,” said Clark. “It’s pretty stressful because if I don’t do a good job, there’s always a chance the player might think it’s uncomfortable – or worst case scenario, it falls out during the game.”

As luck or skill would have it, Clark says he is 100% on any pads he’s mic’d up, and he hopes that trend stays. “Once the game starts, I get to my spot in the stadium where my camera is, and will just follow the player wherever they go for the whole game,” he said.

An early interest in filming

Clark has always had an interest in video and editing, along with growing up around sports. “I remember when I was 10; I started making football highlight videos of people like Adam Olson or Haakon Hansen, along with highlights from our youth football team,” he recalled. “That kind of was the spark to start everything.”

From that point on, he was obsessed with all things video and editing but never had a specific goal to be in sports media. “I really thought I’d be in a newsroom or would be an unpaid intern for some Hollywood studio,” he reflected.

Clark attended college at the University of Wisconsin-Stout. He earned his degree in  entertainment design, with a concentration in digital cinema and a minor in video and photography and art history, but wasn’t sure what he wanted to do with all that. Only that he wanted to do something with digital media.

He recalls it being difficult going through these programs, having to learn everything from drawing, sculpting, and painting, along with the expected video production courses. “I legitimately had zero drawing, sculpting or painting experience, so there were some huge hurdles to overcome in the first couple years of the program,” recalled Clark. “Luckily, with the support of some awesome professors and friends, I made it through the general requirements for the program in order to continue.” He also embraced opportunities to study abroad in New Zealand and Iceland, which helped grow his video production skills and portfolio.

After graduating in the spring of 2019, Clark said that he applied for hundreds of jobs over that summer. “One random night, my mom (Carolyn Clark) noticed there was an intern position open for the Minnesota Vikings. I almost dismissed it, thinking there was no chance at all I would be able to get it,” Clark recalled. But he sent in his application for a media services production internship anyway and got a reply from the Vikings which led to interviews that led to a job.

“I still remember the day in late August 2019 that they called me in and offered me the job,” said Clark. It was a dream come true, he noted.

But in early 2020, COVID-19 became a reality, and everything became uncertain. Thankfully for Clark, the Vikings kept him on board for another season. And after a year and a half into his internship, he decided to take the next step.

After developing positive relationships within the Vikings organization, which put in a good word for him on a number of jobs around the NFL, on April 29, Clark got a call from the Tampa Bay Buccaneers asking if he would like to be the next producer for the Bucs.

“Needless to say, I was beyond excited and accepted,” he recalled.

Challenges and adjusting to Florida

The biggest challenge of the job, Clark said, is the schedule. “It is honestly a seven day a week job, working 12-15 hour days almost every day during the season,” he said. “The bright side is that in the offseason, there’s a lot more time and flexibility. Aside from the job itself, it was really hard leaving Minnesota for Florida. I had no family or friends down here, so it really was starting completely new.”

Clark is currently living in northern Tampa and says he has started to love the Florida life, especially in these winter months. Though the weather is nice, it is a big adjustment from living in Minnesota or Wisconsin his whole life, he added.

It is still very early in his career, but Clark’s long-term goals are to eventually be a senior producer within the NFL. Though he admits his goals change at times, he loves the field he’s in. He says the job is constantly evolving and relies on relationships with the players on the team. “The Buccaneers have such a different dynamic with their players than most of the NFL,” he said. “In our series like ‘Tommy and Gronky’ or ‘Horsin’ around with Devin White,’ it shows a much more genuine side of the players than what most of the NFL teams are able to capture. My goal is to continue to produce series that show the personality of these players, and show they’re more than the gladiators they are on the field. There’s so much personality and emotion behind the scenes that people don’t see, and I think producing content showing that can help bridge the gap between the general public and these NFL players.”

What he’s doing now, he says, wasn’t possible without growing up in a community like Pine City and without the amount of support, lessons, and relationships he developed growing up here.

“People like Kyle Allen and Jeff Brever kept me focused in some of the most confusing and trying times growing up,” noted Clark. “My parents couldn’t have been more supportive through this journey either. Ultimately, Pine City will always be where it all started, and I’m hoping to continue to grow to make those who supported me proud.”

This is a wonderful human interest story, Traci! Love to see stories of Pine Citians who go on to do unique and interesting things in the world. You did a great job with this article, tying in his Pine City roots.