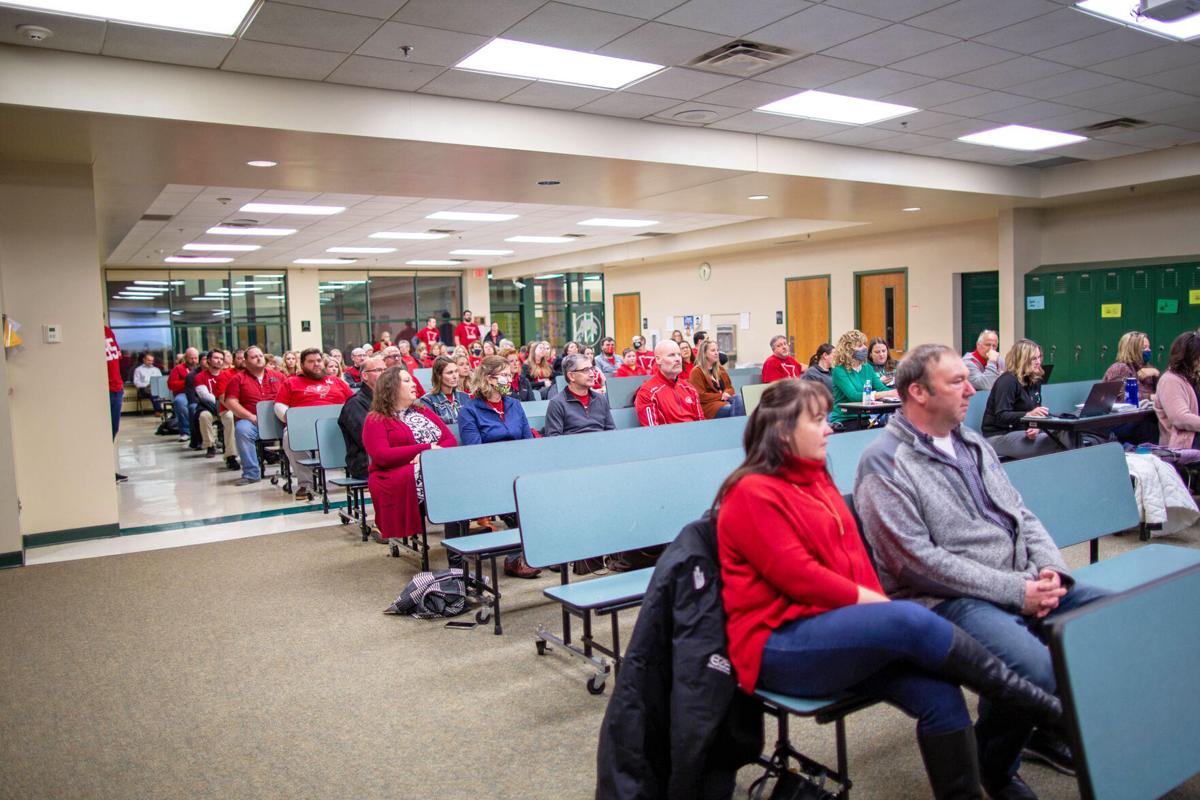 Pine City School teachers show up wearing red at the Tuesday, Jan. 10 school board meeting as a message to the school board and administration that they are in unity about the unsettled contract between the schools and teachers. This is the second time during this particular negotiation that the teachers have come to the meeting in these numbers. 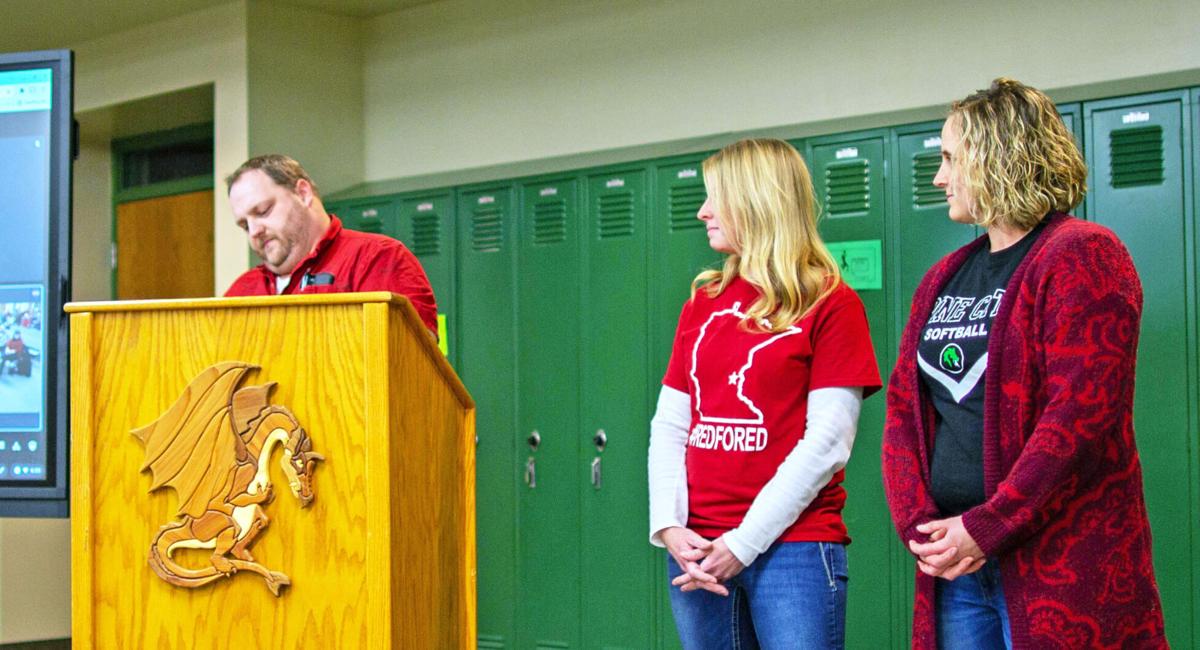 Spokesperson for the teachers’ union, James Foster, addressed the school board and administration expressed frustration on issues that are unresolved in their contract. Alongside him are teachers, Krista Fort and Jena Dennis. 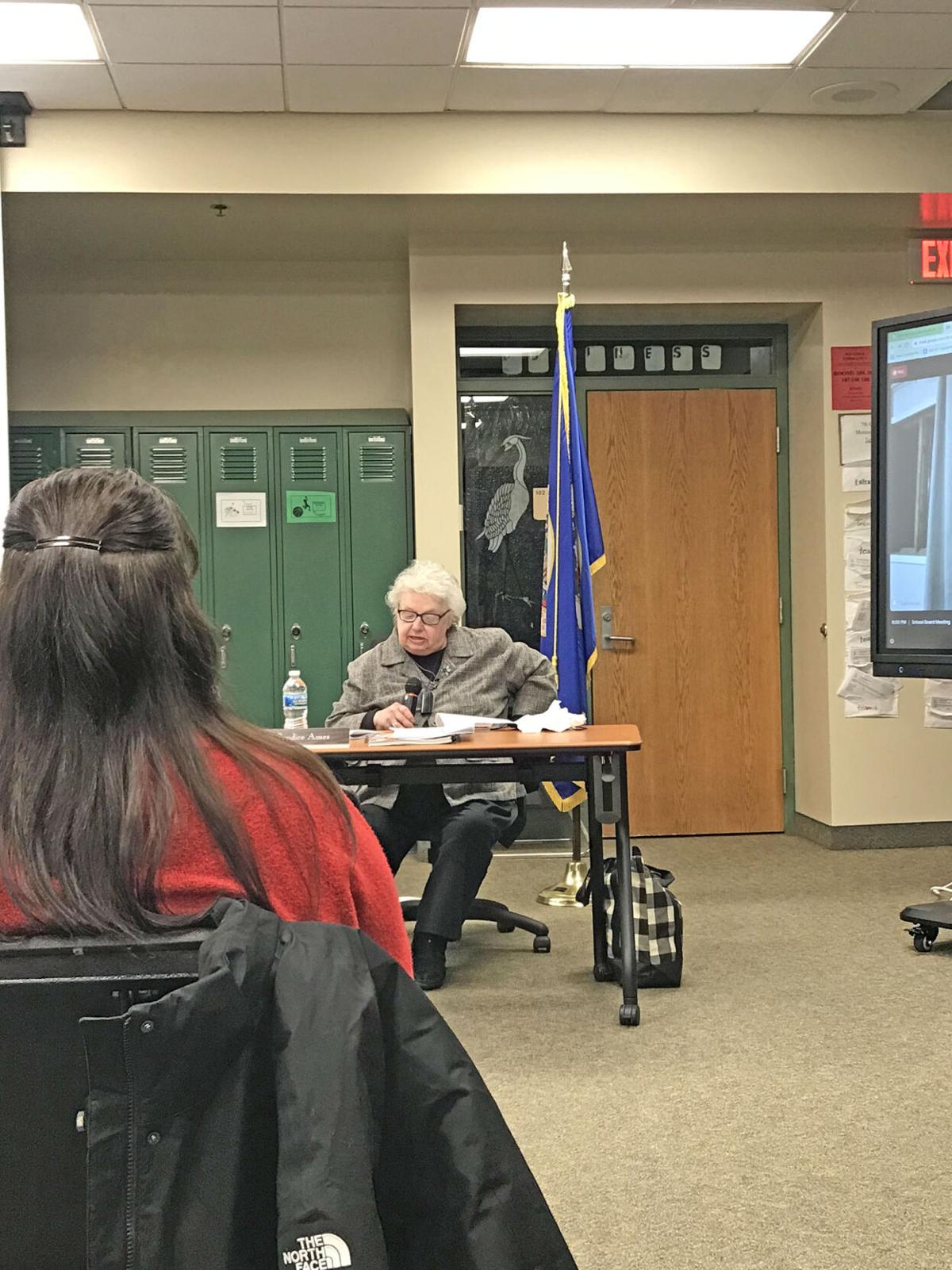 School board member, Candice Ames, spoke out against the proposed contract revision for the school superintendent. 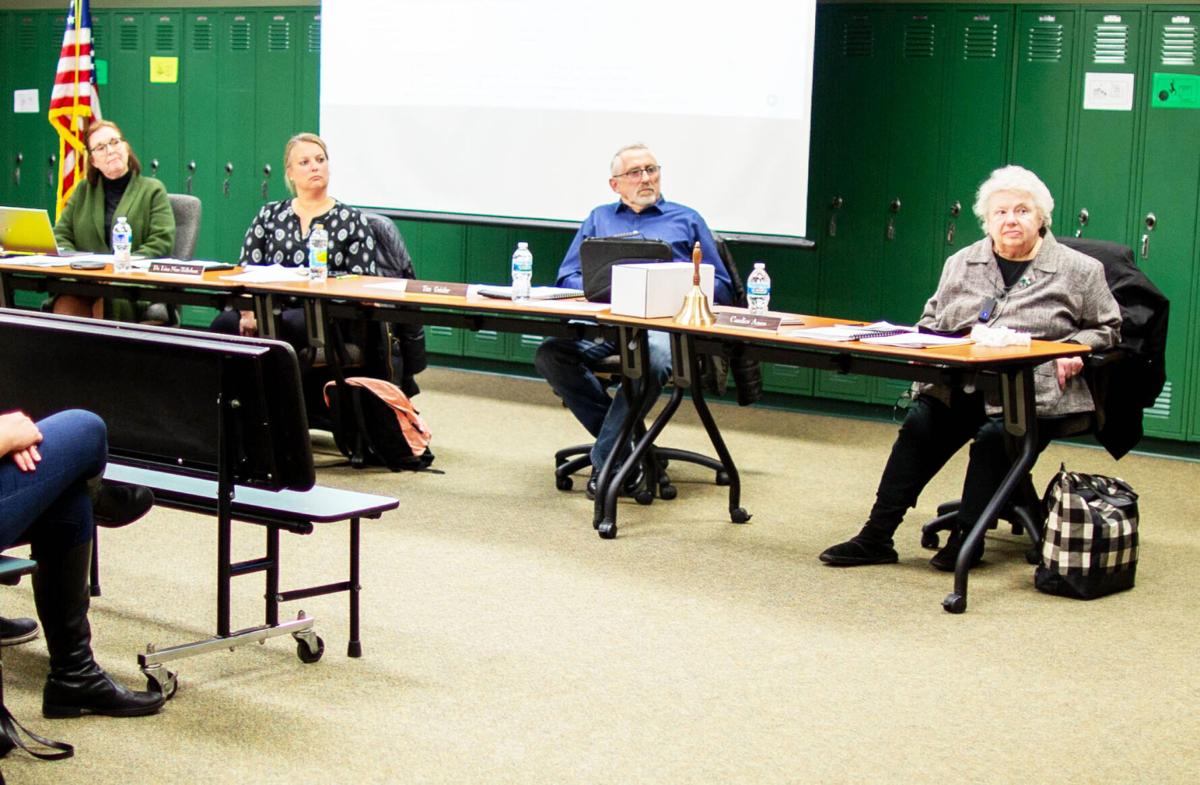 Pine City School teachers show up wearing red at the Tuesday, Jan. 10 school board meeting as a message to the school board and administration that they are in unity about the unsettled contract between the schools and teachers. This is the second time during this particular negotiation that the teachers have come to the meeting in these numbers.

Spokesperson for the teachers’ union, James Foster, addressed the school board and administration expressed frustration on issues that are unresolved in their contract. Alongside him are teachers, Krista Fort and Jena Dennis.

School board member, Candice Ames, spoke out against the proposed contract revision for the school superintendent.

It was a sea of red on Tuesday night at the high school as a large number of teachers attended the meeting wearing red t-shirts to show their unity. The teachers were also seeing red as their contract remains unsettled between the school and teacher’s union and staffing is already short – it was noted later that a sixth grade open teaching position is still unable to be filled.

The spokesperson for the teachers, James Foster, gave little details about the points of contention but expressed his frustration with the board and administration in a prepared speech during the public forum. Alongside him were teachers, Krista Fort and Jena Dennis, who helped him prepare the statement.

What could be gleaned from his speech was that the teachers were unhappy with a new school policy that prohibits teachers from having their own children with them in the classroom after school hours.

Another point of contention, brought up later in the meeting, was the contract with Pine City School Superintendent Paula Foley, though Foster said that the staff supports the contract. The item was initially placed on the consent agenda but pulled by board member Candice Ames and placed on the regular agenda for more discussion.

In Foster’s speech, he noted that teachers don’t join the profession for the pay but do it for the impact it will have in students’ lives. “Ask the families of your coaches if they would rather have their husbands, wives, fathers, and mothers home every night or if they would rather have a few thousand dollars,” he stated. “You don’t willingly give up that time for that little compensation for just any job.”

Foster detailed in his speech the many teachers who had an influence on him going into education, despite his family’s strong background in business.

“In order to adequately approach that topic, I want to dig into a little bit of why there may be some contention and frustration,” Foster stated, adding that it is an honor to work in, live and give back to the community he grew up in.

He said, “Take stock of the sticking points between us and ask yourself this, if you’re going to pick a hill to die on, does it have to be these hills? Ask the question if you really believe that a teacher with a child in their room means you’re not getting your money’s worth. Ask if you really think that those minutes aren’t made up tenfold in every other aspect of this job. The points of contention are molehills, and while they can be frustrating to deal with, we can find solutions if we work together.”

“From an increased workload, to a wider achievement gap from the pandemic, maintaining vigor for students who haven’t missed out and catching up those that have, a climate where half the community thinks we haven’t done enough regarding the pandemic while the other half thinks we’ve gone too far, to defending ourselves and the school, to an unbelievable increase in troubling behavior from the students and a loss of trust from many in the community,” he stated. “I can say with conviction the absolute last thing this school needs at this moment in time is a contentious relationship between the staff and the board, or acrimony between staff and the administration, or distrust between the board and the administration … with one voice we are imploring you, please don’t make this a job that is no longer worth it. Let us treat each other with respect, humility, and a mutual effort to understand.”

He closed with, “It is still, as always, a great day to be a dragon!”

A strong round of applause came from the full seventh grade commons room after Foster’s address to the board.

School board chair, Lisa Nos-Tollefson noted, “That was beautifully said. You are deeply appreciated and we care about you and want to work with you. You are heard and we are going to continue to work with you.” She added that there are many positive things happening even though there are points of contention and distress.

Teacher union president, Jason Rademacher, stated in a later email that he and Foley agreed not to share any details of contention in regards to the contract and made the following statement: “I am very proud to represent Pine City teachers as president of the Local #7208.  Teachers took time out of their busy lives to display their unity and support of public education at tonight’s school board meeting. We are determined, in partnership with district leadership, to work out our challenges that all educators are facing in this very difficult school year.”

During the discussion of Foley’s contract, school board member, Candice Ames, said that “this is no way to run a school,” in regards to her view of communication involving the contract for increased pay. “Effective schools have policies and procedures that are followed in the public interest of a school employee. In Pine City, there have been five cases where previous superintendents have taken on additional responsibilities for not a penny more,” said Ames, adding that most employees are given a two percent raise but that this is a twenty percent raise.

Board member, Dan Peterson, said that the amount of money offered to Foley to take on additional responsibilities was $2,000 per month through June 30, along with a $2,000 payment for a health savings account. This amounted to an additional $14,000 to the contract making Foley’s total salary $139,433.99, from June 2021 through June 2022. Peterson added that this would be in line with what the previous superintendent made.

“We know that Paula has put in a lot of hours and taken on things that have been left undone over the last six years or weren’t getting done or weren’t getting done correctly,” said Peterson. “She responded to board requests and took on a lot of issues. Every group says we are overworked or need new people; I don’t think we could find a consultant or individual to take on this extra work that she’s agreed to take on.”

School board member, JacLynn Cavillin, weighed in saying, “There is no way in good conscience to pay extra when there is already a legal and binding contract in place. The timing of this request could not be any more inappropriate. Our teachers have been providing more support than ever with the pandemic, along with support staff. My vote is for no extra pay.”

School board member Becki Palmblade said, “The previous superintendent made the pay that we are bringing her to. She’s looking for equal compensation. She has gone above and beyond and listens to the community.”